One word linked us to the Moroccan children 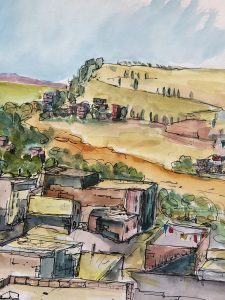 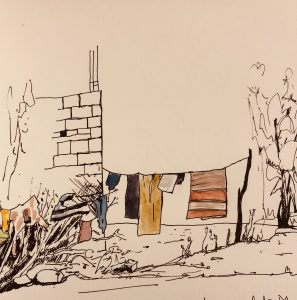 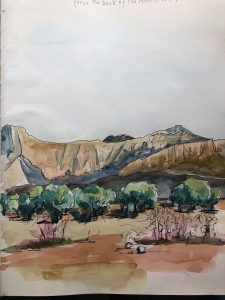 Not that the indigenous peoples of Morocco would necessarily wish to agree but the French influence provides a rather agreeable ‘je ne sais quoi’ to the experience of a visiting incomer. French has integrated into the language to the extent one can often hold a full conversation: but perhaps its most prominent legacy is in the food and there is brilliant fusion through for example the use of fresh herbs and spices with bright uncontaminated tomatoes with things like local mutton and chicken.

As we wander through tracks and poor villages see the raw simplicities of the people eking out a living from the dry ground under a beating sun. A rabble of boys find us sketching and using catapults draw our attention to their simple amusements by pinging stones at the tin water tower to make a tuneful hollow sound, they laugh loudly.

We look up to find them being chased by an older man who throws rocks at them. Undeterred they return to us from a different direction and we speak to them in French. They laugh and chatter and are interested in our endeavour. They sign my sketchbook with delight. 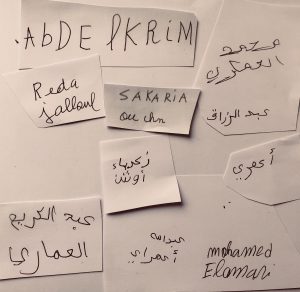 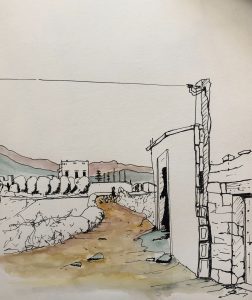 My friend Alice who lives in France comments that these boys don’t understand our French – and we realise that schoolchildren perhaps no older than 14 are now some sixty years on from the power of the French protectorate and in two generations their Berber language is back fully dominant. They don’t carry mobile phones: they play simple games with catapults and are happy in their surroundings without the French. How nice.

‘Kore – rhone – ah – veer- russ’  they say with a quizzical expression and upturned eyebrow. We know that’s not Berber or French and then realise they are not at school for one reason only – and by that word we understood that they might be better served if we are away from them.
So, within a day or so we make our way to the airport as their King had just suggested and we hope they are safe away from us English.

when I arrived back I put a booklet together Dar Tigamino in the Raw. Have a look.