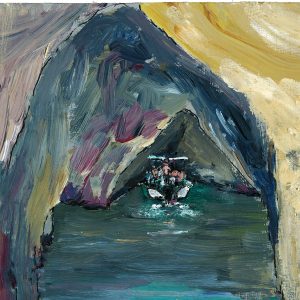 Only an artist impression can begin to portray the horror of a crazy tourist entering a hitherto unexplored cave on the west cost of Paxos earlier this month. Expectations by a vulnerable group of seeing ‘marvellous rock formations and unseen animals of the deep ocean’ were soon dashed as a female voice was heard yelping “I am leaving. .. I have to get off….” . But of course there was no-where to go and undeterred the captain pressed on and the expedition continued in somewhat silence: with the party disappearing through a narrow creek into the vast cliff of limestone.

At breakfast that day the ‘Harrison Ford’ like physique of the captain dressed in dark shorts and a military type shirt was heard to be genuinely optimistic about the adventure and was properly prepared to walk through the unidentified and mysterious labyrinths to seek out the dark waters and cave structures. But others care to differ about the escapade, which has still an unknown ending.

Only later it was revealed that the captain had hired a local tourist boat under the pretext of a family daytrip and had precious little understanding of geology or marine life. According to one account from one local boat-boy Fanis, the vessel was over laden with people and carried clear alcohol in the bottled water (ouso) in an attempt to drug the passengers so they would have less fear of the adventure… ” he hired three boats so as to confuse us as to what was going on and later demanded cold boxes” said Fanis “and he even had an accomplice pay for my girlfriends drinks, I suppose in a move to persuade me to help?”

Such is the charm of the chain smoking swarthy former metropolitan policeman now with business connections in the far east and suspicious currency dealings. He was heard being reprimanded by a lady in the boat shop at about ten o’clock one evening bout payment terms.

On the trip, he apparently tried to exemplify his skills by swimming through the water pulling the boat with his teeth.  One by-stander said the captain was known for misadventure and apparently a flying career in the Himalayas had ended in disaster but he lived to tell the tale. He’s tried riding and football with moderate success and now is attempting boating.

The Island authorities were unable to confirm what had happened but it is believed the Gentleman Jezza as he is thought to be called was escorted by boat to the mainland by water taxi at first light on morning. It is understood that his crew of adventurers all survived but are too frightened to speak out and are being repatriated following counselling.

Others say he has been spotted in northern France (for the send time this summer) inveigling another group on similar waterborne activities.

Fanis keeps his job and has been praised for the exemplary way in which he treats the customers no matter what they ask him to do. 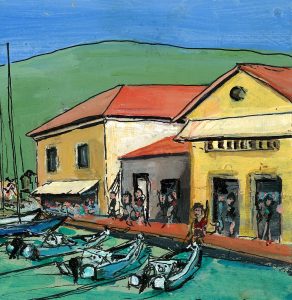