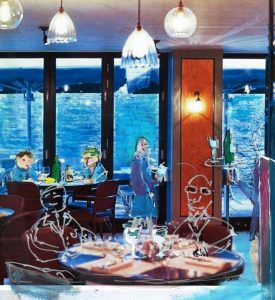 Entering the restaurant Cote yesterday the name above the door conjures up perhaps the moment of French ambiance that one might absorb to enjoy a meal on a spring day in Cirencester.

The very word  cote  does exhibit an agreeable cross-over of expression between french and english in a way that we can pronounce and understand – much as the word  pret  has done in other eateries.
The gushing staff however were not quite on this wavelength which put my friend Nicholas and I into an amusing five minutes as we took on the atmosphere and platters of luncheon.

We had on offer Badoit, as we know, a French label of fizzy water: but that only became apparent when we had de-constructed the utteration  Bad- oy-t  by the smiling waitress. Or, and perhaps with more of a sales revenue in mind, we could experience extra fresh super filtered  cowt  (so that’s Cote) very own water in a stone jar. We had both to avoid embarrassment of communication and they slipped down a treat.
And then my friend who with Scottish ascendency, a fair skin and auburn appearance to my surprise seeks from another of the attending ‘coterie’ a ‘French mustard’ with his beef: and with interest the reply arrives that they had no french mustard but they did serve ‘English’, ‘Dijon’ or ‘Wholegrain’.

So he went for Dijon and assumed it was from across the water even though the maitre d had no clue.
The attentiveness of the workforce was palpable, and the lovely juxtaposition of le francais with the anglais is most appealing but it’s the just je ne sais quoi that is sufficient to warrant a revisit, which I shall do all ‘expectative’. Try it Cote Brasserie and you might have fun.